Quite a bit of sunshine around in the morning but mostly cloudy during the afternoon with some seriously heavy showers, every now and again! We popped a few miles north and parked in a little car park above Croy Beach, there was actually another car park further down almost on the beach but we didn’t mind the walk. 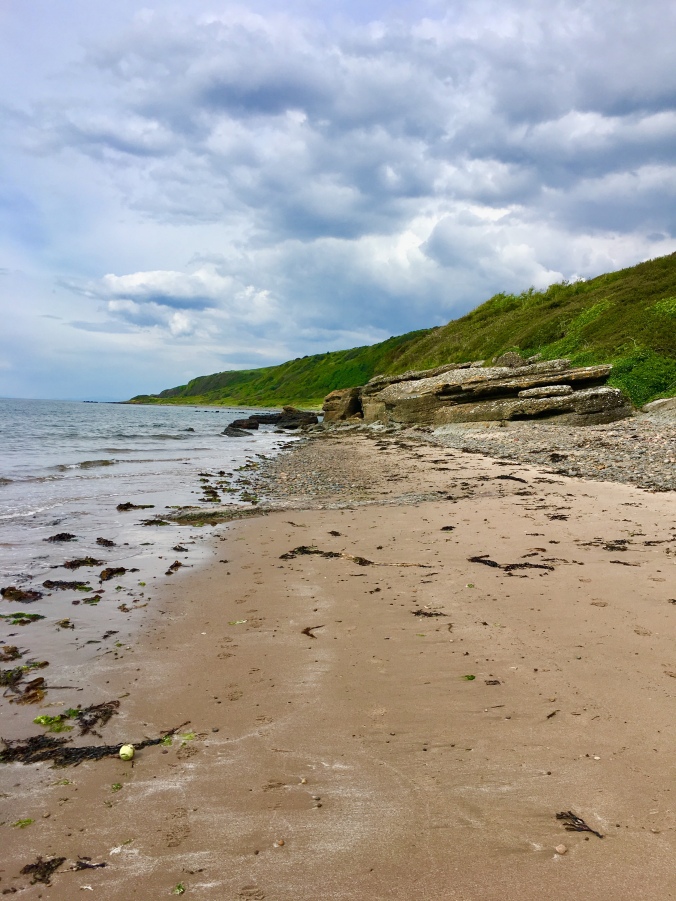 The beach stretches round southwards into Culzean Bay with a mixture of sand and rocks and similarly northwards beyond Isle Port. We have already walked this beach before but hey I’m not against repeating myself! This time though the tide was well on its way in, so we had a bit of clambering to do to get past the rocks of Isle Port onto the deserted Crane Dyke part of the beach.

I came armed with ball thrower and balls as I was actually hoping for an easy short walk and a bit more sunshine! Not to worry we shall continue along the coastal path up on to the cliff tops and see where it leads to.

Spectacular views southwards as far as Turnberry Lighthouse and of course Ailsa Craig just sitting on top of the aquamarine water beneath turbulent skies.

When we got to the top a sign on the gate informed us that dogs are not allowed through the fields as young livestock around! Great! However as the first field was cropped, I took the chance (well we have just hiked all the way up here!) as Poppydog is on the lead to follow the path around the edge of the field. We continued on for another mile or so but to be honest we were wading through almost waist high grass with too much hedgerow to properly enjoy the views and so we about turned and headed back down to the beach to play some more.

We covered about 5 miles and just made it back to the car before the heavens opened!

High Tide in the afternoons is a bit of a nuisance really!

I really was spoilt with the weather last year – I have not yet been out for the day without my jacket as even though it has been sunny lots of times there has always been a chilly coastal breeze.