A grey start to the day but hen it just got better and better, with beautiful blue skies and bright sunshine, it’s a pity nobody turned the wind off though! As high tide was at 1.30, we took a late start and headed off to see Broadsea Bay, up beyond Portpatrick on the North Rhinns west coast. We found the path down to the beach (actually an access road) a mile or so from the road and parked on the roadside. All was well for the first mile, a pleasant walk through farmland and then as we rounded a bend in the track….

As you know I dislike cows but there was a narrow footpath down by the fence and I thought they might loose interest if we went out of sight below the gorse – not so!! First one trotted down the bank for a better look and then all of a sudden they were crowding down on us – it was very frightening as they were not at all perturbed by me shouting and waving the ball thrower at them and Poppydog, not one to give in in the face of adversity, though clearly terrified, was barking right back in their faces – Ok an exit strategy was required and fast! So I literally jumped over the fence (about waist height) into the next (cow free – I checked!) field and dragged Poppydog over by the scruff of her neck, receiving a couple of jolts from the top wire which was electrified on the way! After putting a bit of distance between us we both collapsed in the long grass – quite frankly terrified! 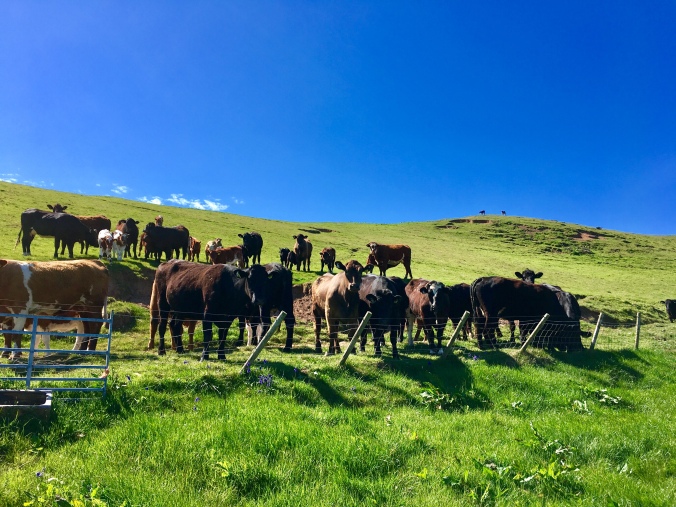 To say we got out of there as fast as we could is putting it mildly and I’m afraid to say Broadsea Bay will have to remain a mystery and there was no other way down!

Feeling a bit cheated (and shaken) we got back in the car and drove to Killantringan Lighthouse parked up the car and set off following the footpath down towards the beach.

Now for our second adventure of the day! I use the term footpath lightly as there was no official sign of a footpath just a narrow pathway through the grass, clambering over rocks and then it just seemed to peter out onto the rocks, several metres above the sand! Not a problem for Poppydog, she was already down on the beach and in the end I managed to find enough footholds to get down safely though getting back up would be quite another matter! Still we’re down, let’s enjoy it!

What an absolute beauty!

As the tide recedes we were able to get around the rocks to one sandy inlet after another. 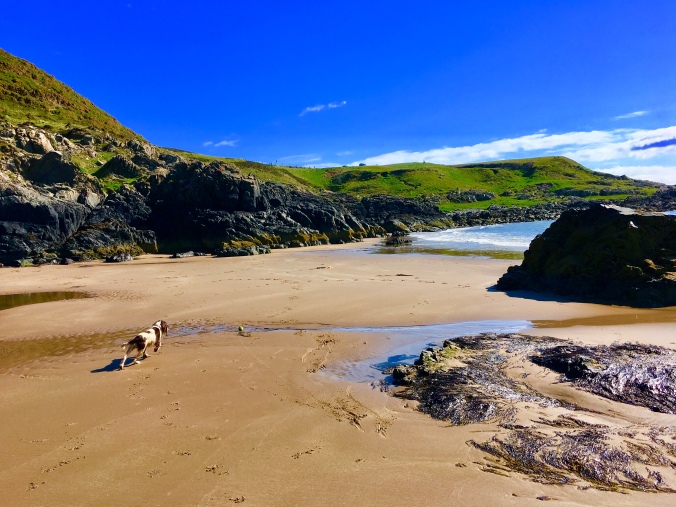 After a while we were able to get onto the equally beautiful Knock Bay. 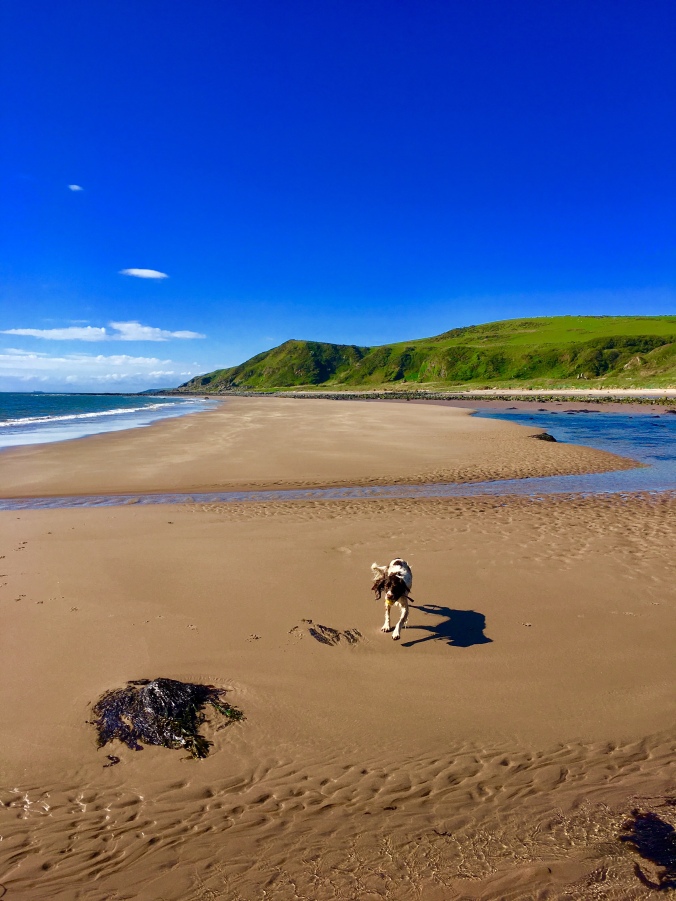 As we have been wandering about, I have also been looking for a suitable way back up off the beach and if the tide doesn’t recede far enough to enable us to go around the rocks and access the lower grassy knoll were the picnic area is – it looks like clambering up the grassy bank (behind the rocks we clambered over on our way down) is the only way!

Fortunately the sun was shining on us both metaphorically and literally and we were able to easily get to the picnic area on our return. Clearly one is only supposed to access the beach at low tide!!

I can’t believe that these stunning beaches are so inaccessible – still it was well worth the clamber down and minor panic about how to get back up!

Cows – not even going to try and get past them another time – way too scary for us both!!

One thought on “An exciting afternoon ends well at Killantringan Bay….”