Another chilly and breezy day, but the sun is shining so all is good. We are heading back to Seaton Carew again today, but after parking the car we head southwards away from the town. Here there is a large Nature Reserve running along the back of the beach of dunes giving way to marshland further inland. We stick with the dunes and beach, not wanting to disturb the bird life – well seagulls are fair game – right? Looking back at Seaton Carew….

The beach narrows as the low dunes take over and as there is no one about, Poppydog has a ball running along the beach and through the dunes. 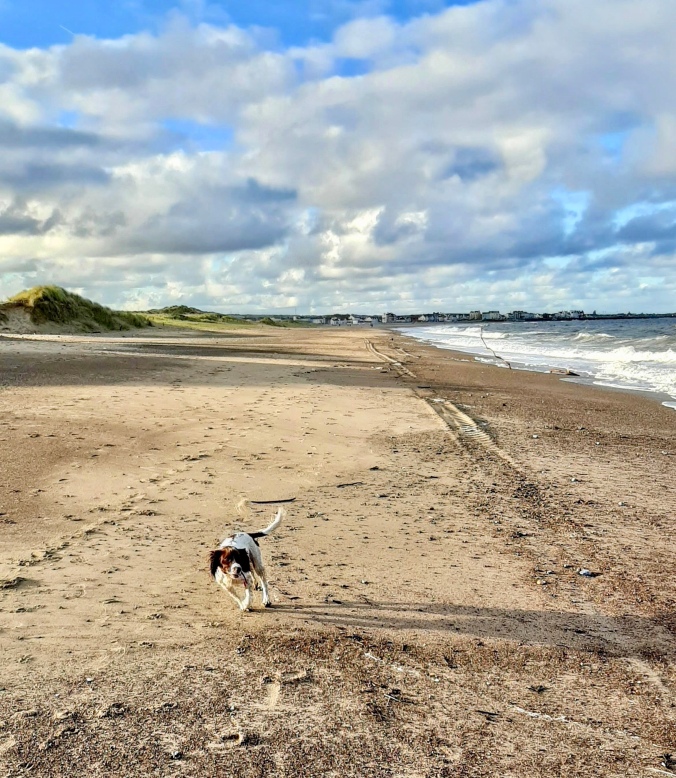 At the end of the beach we clamber over the dunes and breakwater (protecting the river Tee) to reach North Gare Sands which lie on the Tee estuary.

It is not a very appealing beach, the shallows are a bit on the muddy side and the Power Station dominates so we don’t linger and return to enjoy the peace of Seaton Sands instead. 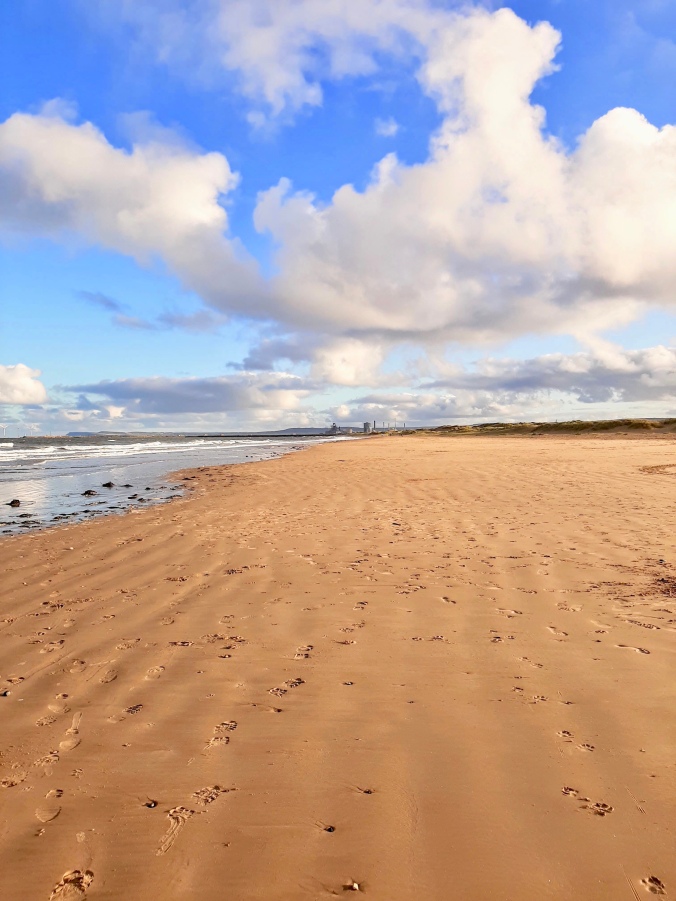 Well this mornings frost can be forgiven as it preceded a beautiful sunny day, a pretty harsh coastal breeze and I think the shorts might be on borrowed time but the sun overrides all. We are too far from the coast to walk but it was only a short drive to Seaton Carew. First though we went on a detour as I saw a road sign for Seal Sands, not showing on Mr OS but hey we’ll give it a whirl! 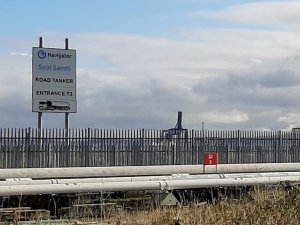 Ah after driving through several miles of pipeline attached to vast cylinders, huge concrete buildings decorated with massive concrete chimneys and all manner of electric pylon we realise that my idea of ‘sands’ is somewhat different to this sprawl of energy making stuff!! So we about turn and reroute to Seaton Carew…. 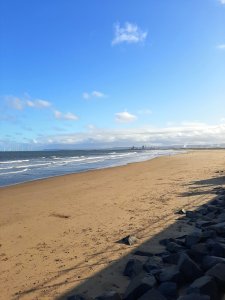 A long stretch of windblown sand backed by a smallish town of seaside shops and rows of well kept terraces. By avoiding the sea front parking we parked up for free in a small recreation park just off the front and deciding to walk into the wind, set off along the long wide promenade towards Hartlepool. As we left Seaton Carew behind, the land on the opposite side to the sea looks increasingly scrubby (maybe reclaimed industrial land?). The sea is quite rough and the tide incoming so Carr House Sands in Hartlepool Bay as we are approaching Hartlepool are pretty much a hidden treasure as the waves are pounding up to the huge rock strewn breakwater. 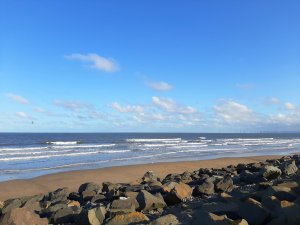 This rather attractive sculpture ‘Waves’ made partly from sea glass collected by the people of Hartlepool sits without any grand statement part way along the shore. 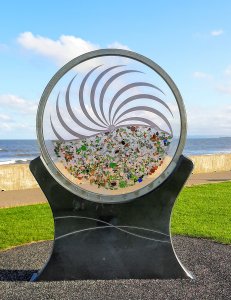 Though the sun is still shining brightly the cold wind is blasting down the shore so it was a bit of a relief to reach the rather complex system of piers and enclosed harbour / marinas of Hartlepool. Mindyou thus almost completely black beach within south pier, somehow doesn’t look too inviting! 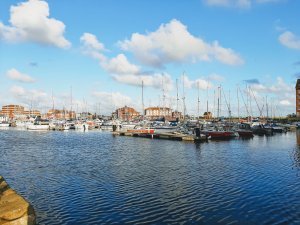 The Royal Navy Museum based around an inner quay looked quite pretty in the sunshine but we couldn’t get a proper look at the old ship which was a shame (ok so I could have paid to go into the museum!). 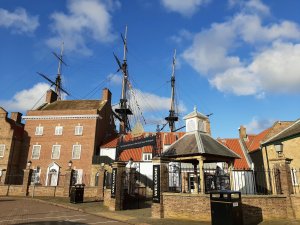 I’m afraid the rest of the town was looking a bit neglected, plenty of new retail areas but also plenty of original shops boarded up, wide areas of untamed and litter strewn scrubland – sorry Hartlepool, hopefully you will get there.

At this point we started to make our way back along the promenade, the waves by now crashing against the defensive rocks and occasionally catching us with a fine spray and some serious rain clouds lurking out at sea.

And these really cheer you up….

Well if we had any cobwebs today’s blustery 9 mile walk has sent them on their way!

An absolute corker of a day, cold but sunny all day. An easy journey for us today, straight down the A19 for about 40 miles and 2 minutes off the road and we arrive! We are staying at White Water CAMC site, which is on the edge of the river Tees next to the White Water Park and were soon set up and ready to explore.

A short walk took as down across the Tees Barrage (a large complicated bridge / dam that protects the river from flooding in either direction by regulating the amount of water flowing into or from the tidal estuary) to the far riverside path. It us quite built up with mostly modern Durham University Campuses and small offices on this side (south) and a growing number of residential estates on the other side. Neither particularly attractive or interesting but pleasant enough for a walk along the wide path. We passed the Infinity Bridge (pedestrian) looking quite spectacular in the sunshine.

We crossed back over the river at the next bridge, walking back along the north side of the Tees taking a wander around the White Water Park in the last of the days sunshine.

It is quite clever and runs off the power of the river or tide – hopefully we shall get to see it in use whilst we are here.

A lovely clear sunny day for us to explore south of the Tyne. A bit of a drive down to our most southerly destination from this site to a suburb of Sunderland called Hendon. Just beyond the expansive Sunderland docks a strip of rather greyish sand located down some back alley accessed through a rather rundown industrial estate. Not the ideal spot for a summer holiday, though appearing popular with anglers and ‘kids’ with nothing better to do than ride up and down the half a mile or so of concrete promenade on their (or indeed someone else’s -it was that kind of place!) motorbikes.

Needless to say we didn’t stop long and at no point did we go out of eyeshot of the car! Back across Sunderland Docks to the much more desirable Seaburn seaside village. Our first stop was the pretty inner Roker Harbour Beach, wonderfully sheltered by two long sea walls and I would imagine good for swimming.

We wandered out along one of the sea walls to get a closer look at Roker Lighthouse.

Continuing north beyond the sea walls are not the ever increasing (as the tide is dropping) sandy Roker Beach.

Backed by a promenade and a series of bars and restaurants – quite the place to be on a warm summers evening.

At the end of the beach we climbed up onto the headland of Parson’s Rock (a rocky outcrop separating the two main beaches) taking a moment to look at Seaburn Lighthouse. 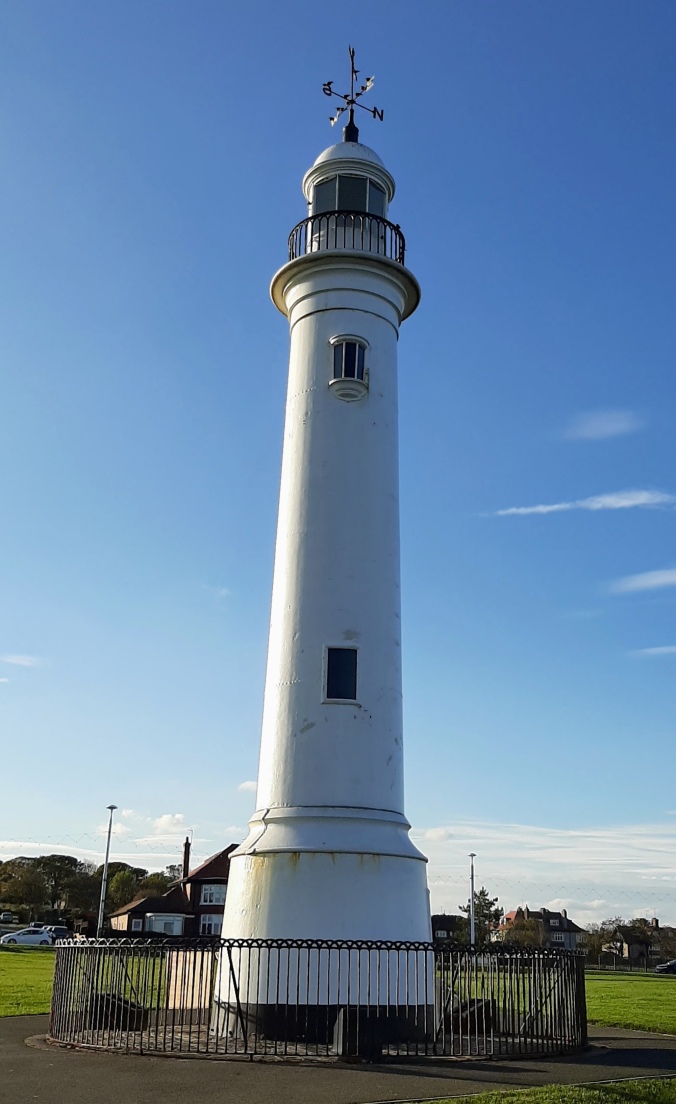 Before wandering down onto Seaburn Sands or Whitburn Sands (it seems to be called either depending on what map you are looking at) another lovely stretch of low tide sand.

Both beaches look to have a strip of soft dry sand above the high tide mark.

Another grey but dry day for us. Today we are off to find the east coast end of Hadrian’s Wall. Last year we found the western end in Bowness-on-Solway hidden down a little pathway – not the actual wall just its location – still quite stunning. 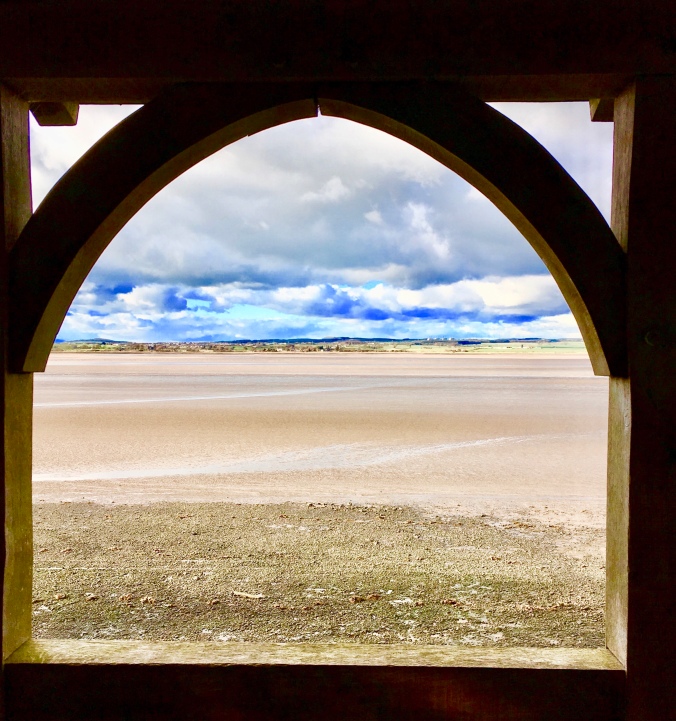 This end was easier to find but somehow not that impressive as it has been rebuilt and doesn’t sit on the bank of the river or coast as I would have expected. Still here it is…

We then drove to Riverside Park and wandered down through the park to the river.

Enjoying a peaceful mile or so until the riverbank became ‘developed’. 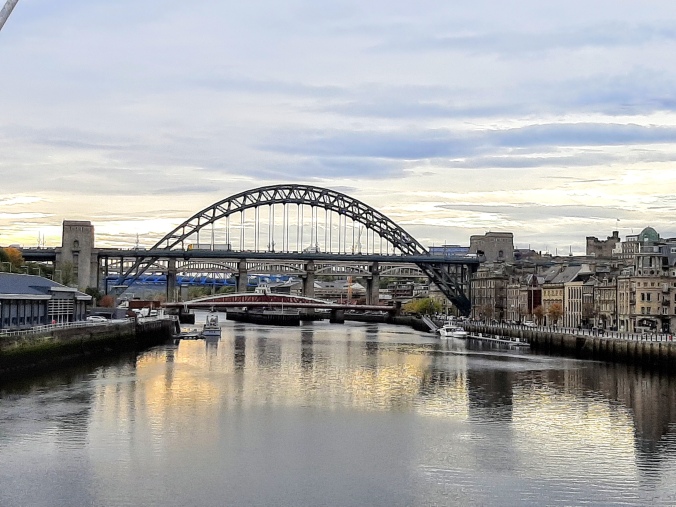 Rather a stunning glass theatre graces the opposite shore.

We wandered around a bit to find the castle which really wasn’t that impressive. 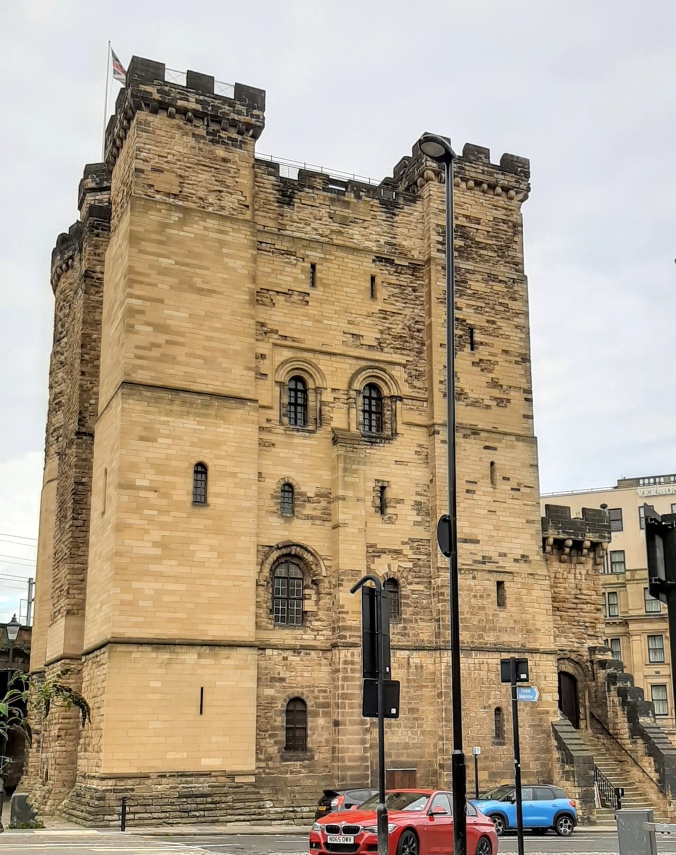 And yeh well that kind of sums up Newcastle – I for one was expecting more!