A bit of a damp start to the day and windy as per but we will give it a go. Today we are going to try and find Johnny Flinton’s Harbour. This is the northern end of Cayton Bay and I understand at low tide you can walk all the way along, making this a fabulous crescent shaped bay from Knipe Point in the north to Red Cliff Point in the south. However the tides are not with us today, so we park up in the cliffs over looking Cayton Bay and follow the coastal path along the cliffs towards Filey (north).

As you can see we had an amazing view down on to Cayton Bay and a bit further along a similar view down onto Johnny Flinton’s Harbour. 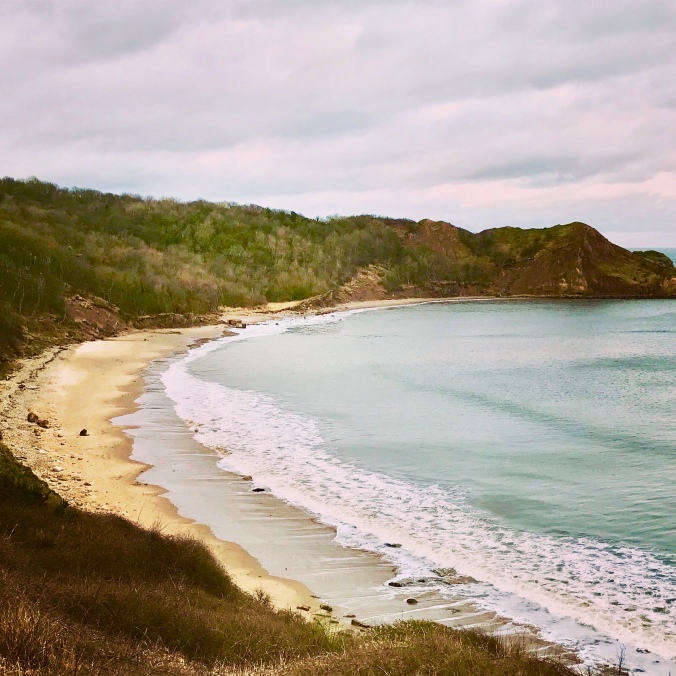 I couldn’t find a definitive answer as to who Johnny Flinton was but the most likely explanation is that he was a smuggler who used this Bay to land and hide his ‘loot’ – how exciting! A long flight of steps winds its way down onto the beach from the coastal path, unfortunately after all the rain these rather resemble a waterfall so we picked our way down using trees and undergrowth to stop ourselves (well me actually as Poppydog is already down there exploring!) from slithering down in the mud. Worth it though….

A pretty sheltered mostly sandy beach to ourselves – we like.

Poppydog is soon suitably lagged in mud and sand but happy to charge around the beach barking and chasing who knows what.

And I am by now pretty good at being able to zone her racket out so all is good.

After a while it is time to face the clamber back up and having not found any alternative route, I have decided that it is more sensible if we both make our own way up. Good job as I need both hands to secure and pull myself up, as my boots quickly resemble great clods of mud with no grip whatsoever and indeed I do end up slithering back down on my backside a couple of times until I reach the drier steps above the waterfall part way up the bank!!

As we eventually reach the car, tired and muddy – I still think it was worth it!