A grey day but mostly dry. We are still trying to explore as many of the beaches that are accessible – that is where the access roads and footpaths haven’t been washed away by the temperamental seas of times gone by, as we can from Bridlington to Spurn Head. Barmston lies south of Fraisthorpe by a few miles but before Ulrome (where access has been eroded).

We ended up parking just outside the small village over a mile away inland as there was no parking in the village itself and the holiday park on the cliff top appeared to be using the small car park whilst moving static vans around. No matter it was a pleasant walk.

Access to the beach was actually a bit of a clamber down from the coastal path aided by the fact that the cliffs are not very high at this point. 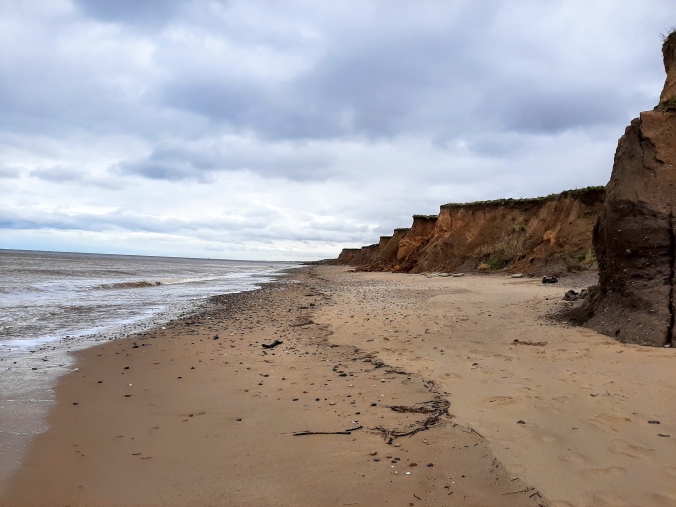 Unsurprisingly we had the beach to ourselves, not that there was a great deal of it as the tide was pretty much at its highest. So at least Poppydog could have a run about and a splash as we wandered along the narrow strip of sand.

It looks as though the main access to the beach has in fact been washed away and indeed the cliffs to look very vulnerable.

I for one wouldn’t wish to have my static van or indeed any other type of van perched up on these – would you?