A rather miserable morning greeted us today, with visibility poor and well just grim really, but Poppydog needed out so we had a damp walk to Seaton Sluice and back without being able to see much at all. However by lunchtime the mizzle had cleared through and we drove a few miles down the coast to Brown’s Point where we finished our walk on Monday. Our first stop was the delightful Cullercoats Bay… 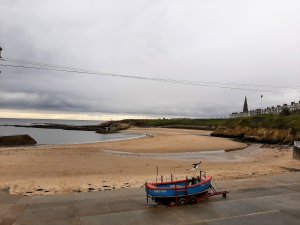 A pretty sandy bay, almost totally enclosed with reasonably high rock face behind and twin piers protecting the bay from harsh waves – I can imagine that this beach is very popular in good weather (it also has a summer dog ban).

We walked across the beach and up the otherside as the headland is too rocky to walk around and almost immediately we are on our way down onto Long Sands. A much longer and wider stretch of sand, home to a couple of cafes and a busy Surf School, clearly in full session…. 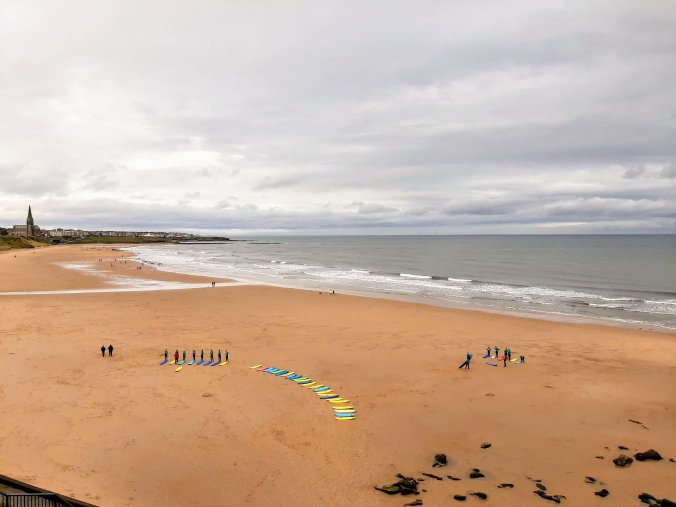 As we wandered along the beach, Tynemouth’s North Pier Lighthouse looks dark and moody under the grey clouds, though there is a glimmer of hope in the sky beyond.

Here the rocky headland prevents us from walking around the headland to the next bay – King Edward’s Bay or Short Sands….

A much smaller sandy bay surrounded by high cliffs and a rather steep climb, with a rather trendy fish bar doing a roaring trade perched just above the beach. The remains of Tynemouth Castle and Abbey sit on the cliffs above, though the cliffs are too steep to make yem particularly visible from the bay below. 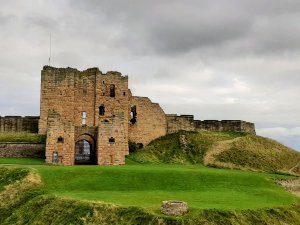 We continued our walk up and past the front entrance to the castle and down to the North Pier beyond. North Pier is some 900 m in length and as we walked along it, looking back we could see the impressive silhouette of the Abbey ruins.

The lighthouse is beautifully shaped from stone blocks and looks across at its twin on South Pier, on the other side of the Tyne.

No dolphins or seals to be seen from here, so we start the long walk back.

Enjoying the sunshine we continue on our way passing the little stone and sand beach of Prior’s Haven, home to the Tyneside Rowing and Sailing Club.

Past the Lord Collingwood statue standing high above the harbour …

And on to the little bits of sandy beaches, that are fast disappearing under the tide, The Flats of North Shields…

With the rather magnificent sculpture of a fisherman, ‘Fiddler’s Green’ in memory of all the North Shields fishermen lost at sea, both in the past and into the future sitting looking out over the Tyne to sea…

This was our turning point with no more beaches to see until we cross the Tyne and we made our way back through this very trendy Edwardian village (once upon a time) of Tynemouth to catch the last of the afternoon sun on the surfers on Long Sands….

And still shining on the charming Cullercoats Watch House, albeit the beach itself is now sitting in the shade of its cliffs. 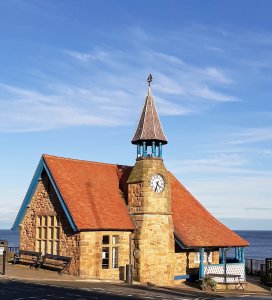 A rather lovely afternoon, some pretty fab beaches and a decent 8.5 mile walk.