After some light rain and plenty of wind during the night, the morning dawned dry and calm, with the afternoon turning out to be quite sunny, though very windy on the coast. We ventured down the coast towards Ardrossan to pick up where we left off and parked up just south of West Kilbride. Our first glimpse of the sea and shore was quite exciting, especially as it is a fairly full tide (on its way out) and we weren’t sure whether there would be any beach.

But yes there was a long strip of soft almost pink sand (the colour of Ambrosia Rice Pudding!) with enough wet sand to make for comfortable walking.

The sea looking lovely and clear, though nowhere near as warm as it was last week in Ayr!

After a couple of miles we arrived on the soft, albeit a bit pebbly sands of Ardrossan.

The ferry (to Arran) terminal a large presence on the skyline.

As we wandered back along Boydston Shore the sand becomes pinker with large expanses now uncovered – a whole new Poppydog playground has opened up! 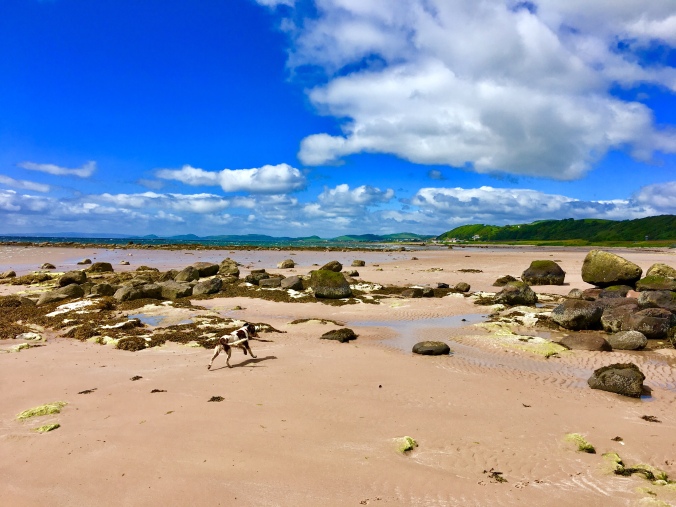 With a nice structural wreck for me to capture. 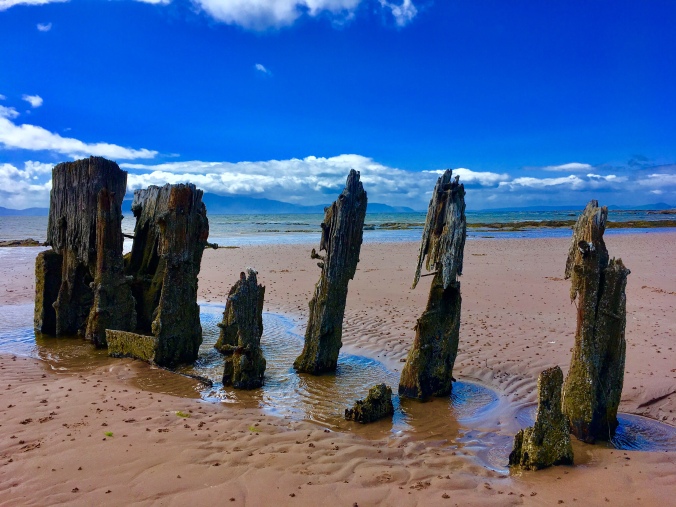 We continued along the beach, beyond where we had left the car as it is such a beautiful afternoon and were soon enjoying the lovely sands of South Inch Bay.

And just over the headland the beautiful twin bay of North Inch.

Around yet another headland lies Seamill Beach a relatively rocky (with some fabulous rock pools) Bay with a thin strip of the mist gorgeous pink sand I have ever seen.

Even Poppydog is so impressed she is shouting about it (or maybe she just wants me to hurry up and throw the ball!

I am rather amazed, though definitely not disappointed to find these beaches pretty empty apart from the odd walker – after all the sun is shining and it is the first week of the school holidays here!

I don’t think this stretch of beach would be much good if you are a keen swimmer as the low tide reveals some pretty rocky patches.